Commentary: Now is the time to put climate change on the African Union’s agenda 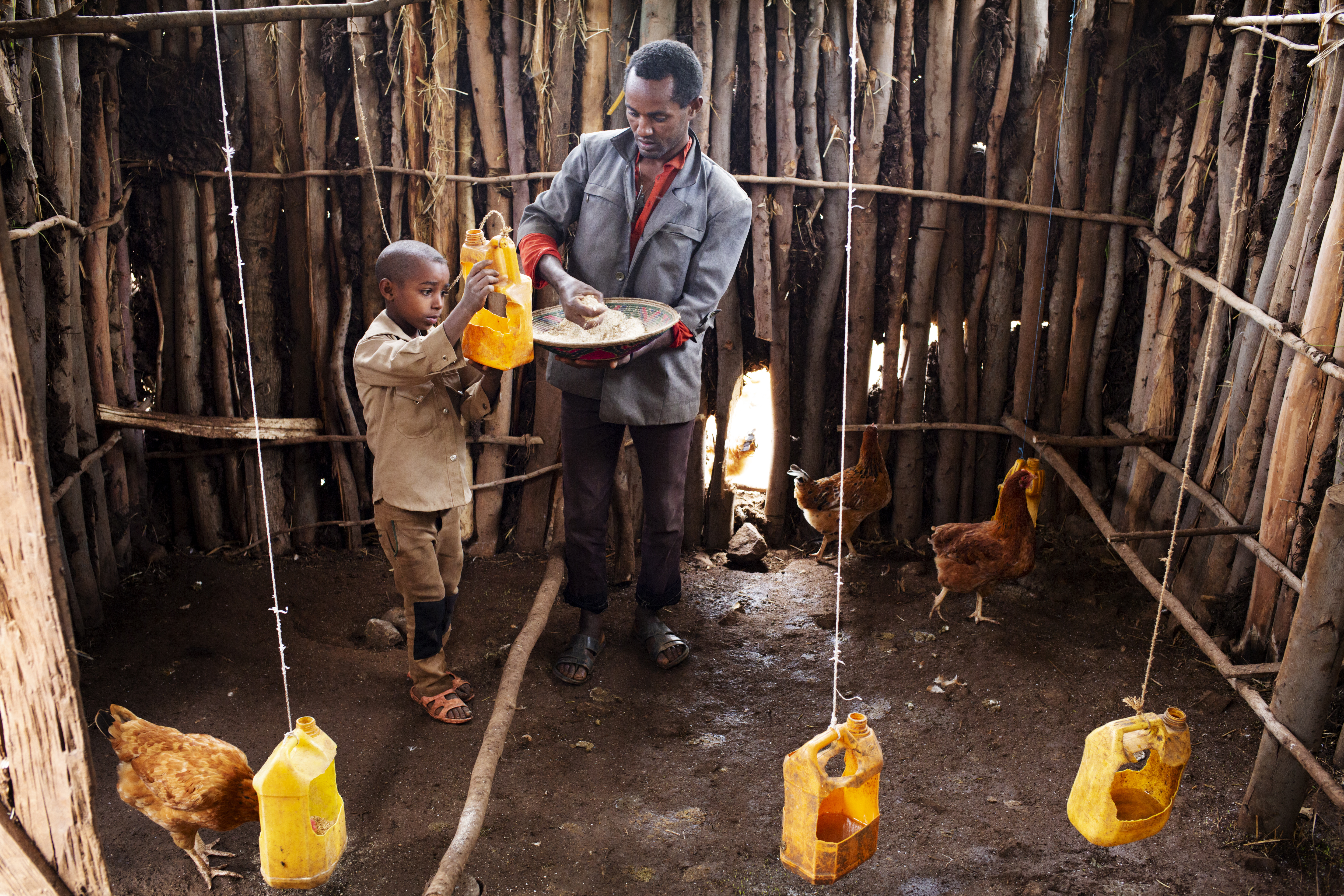 This article was originally published in CNBC Africa.

Photo: Antigegn Wunetu (pictured here with his son, Adisu) and his wife Mekle farm on a watershed restoration and homestead development project site in Bahir Dar, the Amhara Region of Ethiopia. They have just bought 24 chickens/Abbie Trayler-Smith for Panos Pictures/Food and Land Use Coalition.

As African heads of State convene at the African Union (AU) Summit, they will discuss the AU 2020 theme: “silencing the guns”. Conflict and instability still present serious challenges across the continent, hindering development and perpetuating poverty.

2020 is also a critical year for climate action when countries are urged to enhance the ambition of their climate commitments. Current commitments fall short of the Paris Agreement target to limit temperature rise to levels that will avoid the most adverse impacts of climate change.

Stepping up climate ambition matters particularly for Africa. While African countries have not created the climate crisis, they are some of those that are most vulnerable to climate impacts. Over 3 million people were severely affected by Cyclone Idai last March, which destroyed as much as half of Mozambique’s annual crops and critical infrastructure. By 2050, climate change could force more than 86 million people to move across countries in sub-Saharan Africa.

Rising conflict, political instability and the climate crisis are inextricably linked. Conflict happens for many reasons, but water insecurity, and its subsequent impact on land resources, is often a factor. In 2017, water played a major role in conflict in at least 45 countries, particularly in North Africa and the Middle East. As climate change increases the risk of drought, in Africa – where one in every three people already face water scarcity – the stakes are increasing too.

The connection between instability and climate change is not limited to Africa. More than 7 million people in 185 countries participated in climate protests last September to demand that their governments step up climate action. But there is also resistance to climate policies that don’t put people first. Social unrest in France, Chile, Ecuador and elsewhere in 2019 demonstrated that to be acceptable, fuel and energy price reforms and climate policies must deliver clear benefits to people and in particular vulnerable communities.

I myself saw this first-hand when, as Finance Minister, our Government led a reform of costly fossil fuel subsidies in Nigeria. Fortunately, we have a mounting body of evidence that shows that a people-centred approach to climate action is possible.

People-centred climate action aims to unlock social and economic benefits, target these benefits to further equity and ensure a just transition away from a high-carbon economy. This can include measures such as restoring ecosystems in ways that also raise rural incomes, reduce emissions, and build resilience; or using revenues from carbon pricing to better target support to low- and middle-income households. For example, using these savings or revenues to invest in secure clean water and sanitation services for the poorest in Africa can help achieve key development goals.

Identifying opportunities where African countries can lead on climate action whilst achieving both development and climate targets is critical to deliver social benefits. Recent research shows that Ethiopia, host country of the AU Summit, can create jobs, ensure national food security and surpass its milestone of becoming a middle-income country, all while establishing a solid foundation for a new climate economy. Launched in January, the Food and Land Use Coalition’s Action Agenda for a New Food and Land Use Economy highlights crucial entry points of action that will deliver multiple benefits for sustainable development.

These benefits include improving incomes of more than 700,000 smallholder farmers transitioning to commercial crop production, increasing agricultural GDP by $362 million from dairy and poultry commercialisation, overcoming rural financing gaps, and increasing the value of credit-constrained smallholder producers by up to 60% per hectare. Such findings provide a powerful example for Africa, where investments to help poor smallholder farmers adapt to climate change could significantly increase incomes and slash poverty to boost resilience.

People-centred climate action is already happening in parts of Africa. Distributed renewable energy systems, for example, are quickly creating new opportunities for energy access and gender parity. In Ghana, the availability of solar mini-grids boosted women’s entrepreneurship by 29% and increased their incomes by eleven times. In the land-use sector, the Kenya-based Green Belt Movement has planted millions of trees on degraded land with explicit goals to improve rural women’s livelihoods, responding to their need for water, food, firewood and increased incomes.

Many African leaders are well versed in the sustainable development opportunities that lie in tackling climate change. Many can also see how their people and their political fortunes will benefit from leadership on this issue. That’s one reason why 47 African countries, have already indicated their intent to enhance or update their climate commitments in 2020, showing their leadership to implement the Paris Agreement.

2020 provides a unique opportunity for African leaders to simultaneously address the risks of political instability, pressing development needs, and the impacts of climate change. This process clearly can – and must – target social and economic benefits to enhance equity and improve the livelihoods of the poor. Africa can lead with a people-centered approach that can propel sustainable development in ways that improve millions of people’s lives.