Commentary: Carbon pricing should drive African development, not hinder it 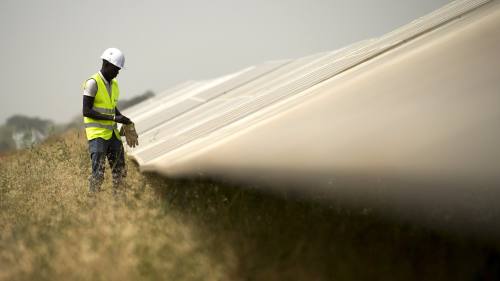 Carbon pricing should drive African development, not hinder it

Government leaders often ask me how they can achieve development goals, such as expanding energy access, while tackling climate change. Some say, “Shouldn’t we use our coal resources to give people electricity first, then go low-carbon later?”

The answer is no. A mounting body of evidence shows that development and climate action go hand-in-hand. In fact, research from The New Climate Economy shows that bold action on climate could deliver $26tn in economic benefits globally between now and 2030. With such unequivocal evidence, the question shifts to “how?”

This week, representatives from government, business and civil society are gathering at the Carbon Pricing Leadership Coalition’s High-Level Assembly to discuss how carbon pricing can be used to shift investments towards low-carbon and climate-resilient projects, and how carbon pricing can address broader social concerns.

First, deliver electricity to those without it. In remote areas of Africa, installing standalone renewables (such as solar home systems) can provide electricity more quickly than connecting to the traditional grid. With new battery technology and mini-grid systems, decentralised renewables can deliver reliable energy to whole communities at a time, helping to grow inclusive, rural economies. At the same time, building utility-scale renewable power plants is now cheaper than building coal plants in most regions. After factoring in the health costs of air pollution, the calculus tips further towards renewables.

Africa’s wealth of solar, wind and geothermal resources gives us a big natural advantage. And while we need to consider a carefully planned transition to rely on these abundant resources, we must phase out fossil fuel subsidies and begin pricing pollution, to remove the man-made disadvantage currently baked into the system.

Second, prioritise resilient infrastructure. Mozambique, Malawi, Zimbabwe and Madagascar recently brought home the terrible tragedies that more frequent, more intense storms can cause. The Red Cross estimates Cyclone Idai damaged or destroyed up to 90 per cent of the city of Beira. For the sake of our lives and our livelihoods, Africa’s new infrastructure, including early warning systems, must be able to withstand a changing climate.

In our need lies our opportunity. The world is expected to invest $90tn in infrastructure by 2030, with most of the growth in emerging and developing economies. Since Africa is constructing much of our infrastructure now, we have the chance to make it sustainable, efficient and resilient from the start, leapfrogging over the challenges other countries face as they upgrade dirty and dated infrastructure.

To finance this need, carbon pricing programmes offer an important avenue for generating revenues governments can invest in resilient infrastructure. For instance, Colombia introduced a carbon tax in 2017, generating $127m that year. The government will use the revenues to support essential environmental and rural development projects.

Third, create the conditions for the right investments. A shrinking oil market will deliver shrinking revenues for fossil-fuel rich economies relying on oil exports for growth. As more and more countries and car manufacturers commit to phase out internal combustion engines and switch to electric vehicles, the reality is that their assets could soon be stranded. India and France will end sales of non-electric cars by 2030 and 2040 respectively. Volvo aims for 50 per cent electric sales by 2025, and Volkswagen will stop producing petrol and diesel vehicles in 2026.

As markets shift, so must Africa. Carbon pricing signals the direction of that shift, towards cleaner 21st century technologies and industries, providing companies and investors with strong financial incentives. Rolling back fossil fuel subsidies, which artificially prop up outdated energy technologies, is also essential to creating the conditions for growing sustainable, resilient economies.

African countries need both domestic and external investment, public and private, to transition quickly to low-carbon, resilient economies. The private sector is already helping to shape a cleaner, more productive future. Blended finance — a mix of public and private investment — is also ramping up. For example, the African Development Bank recently invested $25m in a renewable energy equity fund that plans to add 533 megawatts of electricity across sub-Saharan Africa. This initial public investment is expected to attract private investors to commit a further $60m to $75m, potentially tripling the level of investment.

According to the World Bank, existing carbon price programmes around the world generated about $33bn in 2017. Across the board, revenues from carbon prices can help fund governments’ development priorities. More broadly, carbon pricing shapes decision making well beyond any government’s purview.

There are many specific development priorities that Africa must achieve to improve the lives of our people today and in the future. Carbon pricing can facilitate the delivery of all these objectives. Putting carbon pricing policies in place now can ensure that African countries are full participants in and drivers of the world’s emerging new climate economy.