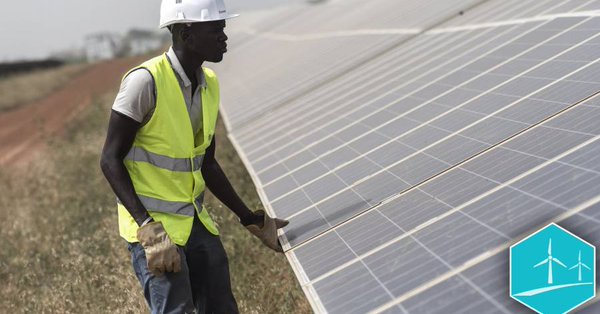 Ngozi Okonjo-Iweala is a Co-Chair of the Global Commission on the Economy and Climate and former Finance Minister of Nigeria.

At the Forum for China-Africa Cooperation in Beijing in early September, Chinese President Xi Jinping pledged $60bn to African nations, giving China and Africa an important opportunity to build a lasting partnership for a sustainable future.

China's offer, consolidated with the reassurance of Mr. Xi's "five no" approach to China's relations with Africa, gives African countries and the African Union an opportunity to work with China to seize the initiative to establish a strong and sustainable development path.

The new investments should be used to establish a network of clean, resilient infrastructure, like solar and wind farms, such as we have in Morocco, Burkina Faso and Kenya, and sustainable transportation projects like in Ethiopia, Rwanda and Nigeria.

The concern about Africa's rising debt profile is real. According to the IMF, sub-Saharan Africa's debt to GDP ratio has risen from 26.3 per cent in 2009 to 48.1 per cent today. This ratio is far higher and in dangerous territory for a handful of countries. Whilst Chinese debt may not be the biggest contributor to this, African countries need to seek a good balance of concessional loans, grants and foreign direct investment, individually and collectively to sustain their development. China is open to this.

During my time as Finance Minister of Nigeria (2011-2015), China worked with us to get a balanced package of assistance that has helped build the light rail system in Abuja and four new airport terminals in Lagos, Port Harcourt, Kano and Abuja, among other projects. Directing Chinese assistance to build sustainable regional infrastructure projects that can unlock the continent's vast potential is key.

Two thirds of the continent's infrastructure is yet to be built and Africa can lead with clean, low-carbon sustainable infrastructure. This approach can lay the foundation for a new growth story, one that creates millions of jobs for our youth, one with efficient and liveable cities, restoration of degraded agricultural lands including a halt to deforestation, and clean energy and water resources.

A new report from the Global Commission on the Economy and Climate, which I co-chair, has found that bold climate action could yield economic benefits worth $26tn between now and 2030. Bold climate action could also generate more than 65m new low-carbon jobs in 2030, equivalent to the entire workforces of the UK and Egypt today combined.

These benefits would extend to countries big and small, including those in Africa. This is supported by other research by the Global Commission focusing on Uganda. This found that green growth approaches could increase the country's GDP by around 10 per cent compared to business-as-usual by 2040, while also reducing greenhouse gas emissions by 28 per cent.

But this opportunity does have a shelf life, which is why we must act quickly and decisively. From 2000 to 2017, the Chinese government, banks, and contractors provided $136bn in loans to African countries. More recently, China's investments in Africa have become a focal point of its Belt and Road Initiative, which supports roads, railways, ports, and other infrastructure projects across almost 70 countries, including some in Africa.

In order to fully unlock the benefits of a low-carbon economy, it is imperative that this initiative be underpinned by principles of sustainability.

Africa's progress toward a low-carbon development path is a golden opportunity for the continent to shine. Climate-smart agriculture could increase crop yields, slow down soil degradation, and boost farmers' incomes. Compact, co-ordinated urban growth could make Africa's cities more efficient and minimise resource needs. Off-grid solar systems could be the fastest way to reach the 590m Africans without access to electricity, while the continent's abundant sunlight could power the low-carbon national grids of the future.

As China transitions to a more sustainable economy itself, it can offer lessons to countries in Africa that want to follow its industrialisation path. The Chinese government is working to address its smog problem by switching from coal to natural gas plants and reducing production in heavy-emitting sectors. It is also setting a price on carbon. Its emissions trading scheme, which was formally announced late last year, is by far the largest in the world.

Together, China and Africa make up one third of the world's population. Increasing ties between the two could have a vast positive impact for the worlds economy and climate. China's experiences and expertise should go a long way in helping African countries develop their renewable resources.

But ultimately it is for Africa to forage its own path, with self-determination towards a more sustainable future. And by focusing on sustainable infrastructure, African leaders will be serving the interests of Africans today as well as future generations.