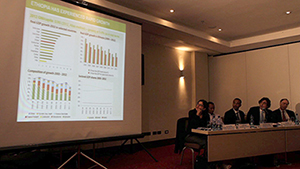 Later Mr. Ato Dessalegen Mesfin, a former government official and executive of Eco-Economy Service PLC, highlighted the opportunity for Ethiopia to leapfrog some developed economies by deploying new technologies. He noted that the New Climate Economy "will add value to Ethiopia if it helps us move in the direction we want to go."

Firew Bekele of the Ethiopian Development Research Institute – who is leading New Climate Economy research in Ethiopia – described an ambitious programme of research that would include a focus on Ethiopia’s efforts to urbanise while increasing agricultural productivity.