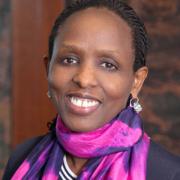 Prior to joining AGRA in September 2014, Dr. Kalibata was Rwanda’s Minister of Agriculture and Animal Resources (MINAGRI). In this role, she was widely considered to be one of the most successful Agriculture Ministers in sub-Saharan Africa. Dr. Kalibata has held several other leadership positions, including Permanent Secretary of Ministry of Agriculture and Deputy Vice Chancellor of University of Rwanda. She also worked for the International Institute of Tropical Agriculture in Uganda, and various other agricultural development organizations. She sits on various boards including the International Fertilizer Development Corporation (IFDC), Bioversity International, Africa Risk Capacity, the Malabo-Montpellier Panel, and is a member of the Global Agenda Council of the World Economic Forum.

Dr. Kalibata has a distinguished track record as an agricultural scientist, policy maker and thought leader. She holds a doctorate in Entomology from the University of Massachusetts, Amherst.