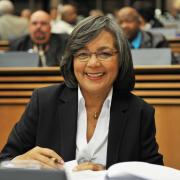 Currently the Minister of Public Works and Infrastructure, Patricia de Lille has fought injustice for more than 40 years through her involvement in politics. She is known for her role as a trade unionist in the struggle for equality and as the initial whistle-blower on the infamous Arms Deal in 1999. In 1988 Ms de Lille was elected Vice-President of the National Council of Trade Unions (NACTU), the first woman to do so.

From 1994 to 2010 she was a member of the South African Parliament where she served on many portfolio committees including as the Chairperson of the Portfolio Committee on Transport. In 2003, she went on to become the first female Member of Parliament to form her own political party in a democratic South Africa and won seats at national, provincial and local level.

She was appointed as Minister of Social Development in the Western Cape government from 2010 until 2011, when she became the Mayor of Cape Town in the 2011 Local Government Elections. She was named the world’s best mayor for the May 2013 by City Mayors, a publication that monitors the work of mayors “who have served their communities well and who have made contributions to the well-being of cities nationally and internationally.”  In 2016 she was re-elected for a second term as Mayor of Cape Town.

She is serving in several leadership positions such as the Trustee of the Nelson Mandela Children’s Fund, an Honorary Colonel in the South African Defence Force and as a former Chancellor of the Durban Institute of Technology

Once described by Nelson Mandela as "a strong, principled woman" and his "favourite opposition politician," she is married with two children, and enjoys playing golf, listening to music and reading in her spare time.