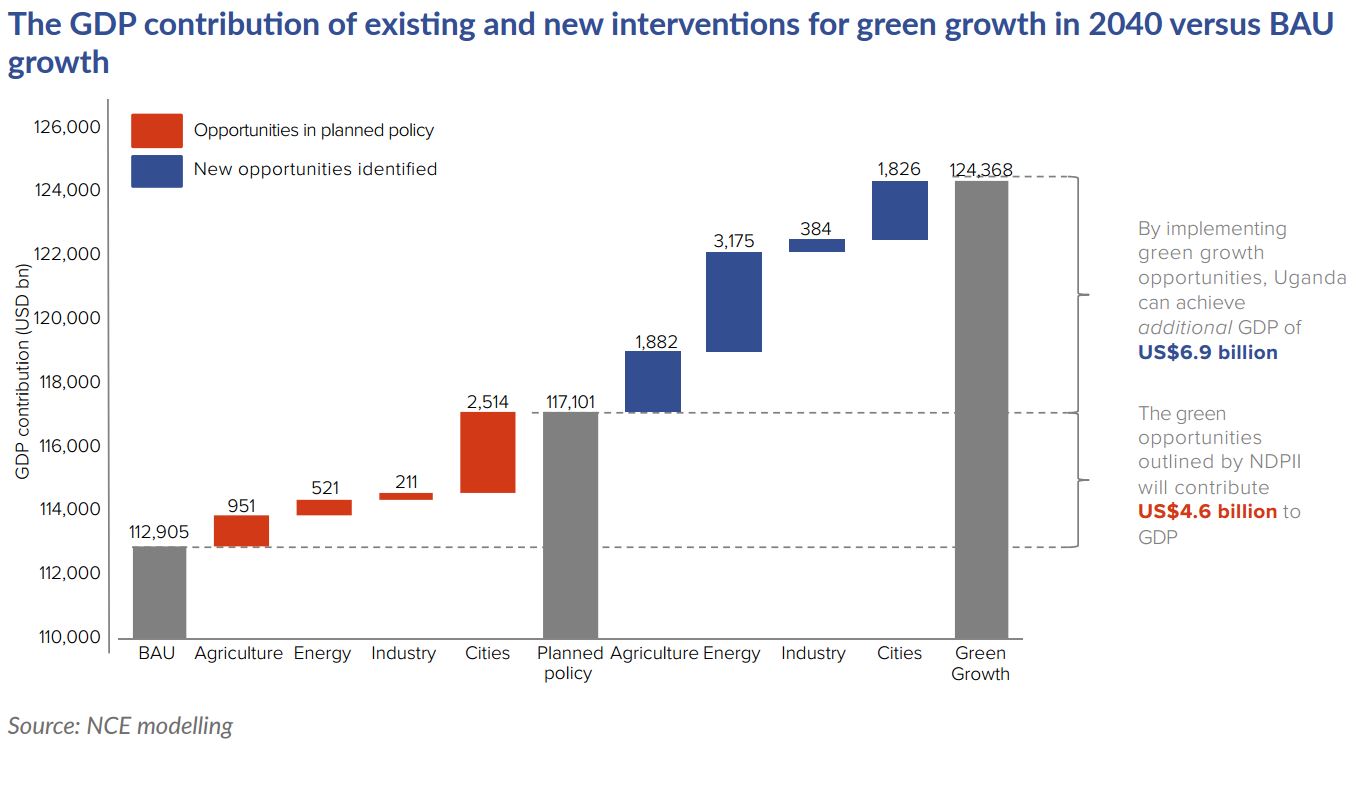 Kampala, December 7, 2016: Green growth in Uganda could increase annual GDP by 10%, or an estimated US$3.4 billion by 2020 and US$11.5 billion by 2040 versus business as usual, according to a new report from the Government of Uganda and the New Climate Economy partnership in Uganda.

In its analysis of 23 green growth interventions, the report also finds that they could create 4 million new jobs (gross) by 2040 and reduce greenhouse gas emissions (GHGs) by 28%, enough to exceed the commitments Uganda made under the Paris Agreement.

“What this report proves is that the benefits of a green growth transition in Uganda would outweigh the costs by a ratio of three to one,” said Peter Okubal, the Global Green Growth Institute Uganda Country Representative. “Uganda can build a growth model that delivers economic and social outcomes at the same time as it protects its abundant natural capital and deals with the impacts of climate change”

The investment required to unlock the green growth opportunities in this report is US$1.8 billion annually to 2020. Many of these opportunities, or something similar, are already identified in current government planning. $200 million is the estimated requirement for incremental public investment, with an additional $250 million needing to be leveraged from the private sector.

Mr.  Keith Muhakanizi, the Permanent Secretary/Secretary to the Treasury alluded to the fact that “Uganda has demonstrated impressive growth in the past two decades and to build on this progress and reach middle-income status by 2040, Uganda needs to diversify its economy and overcome constraints to inclusive growth. Our current plans already incorporate green growth elements, but we’re looking to go even further to promote an economic transformation.”

The report breaks down the economic benefits of green growth across the four key sectors of the economy: agriculture, energy, industry, and cities.

“A green growth pathway does not come without difficult choices, and it’s true there are some trade-offs,” said Dr Sarah Ssewanyana, the Executive Director of The Economic Policy Research Centre. “Balancing these different priorities will be critical to understand where to devote policy effort and resources.”

Nick Godfrey, Head of Policy and Urban Development at the New Climate Economy said “The analysis in the report offers an important starting point for implementation. The findings point towards the strong need for coordination between the Government, the private sector, and development partners to drive this ambitious agenda forward.”

Achieving Uganda’s Development Ambition – The Economic Impact of Green Growth: An Agenda for Action has been prepared by the Government of Uganda, the New Climate Economy, the Economic Policy Research Centre, the Global Green Growth Institute, and the Coalition for Urban Transitions,.

The New Climate Economy releases major flagship reports annually as well as country reports on the United States, China, India and Ethiopia, and sector reports on cities, land use, energy and finance. Most recently, it published The Sustainable Infrastructure Imperative: Financing for Better Growth and Development in October 2016. It has disseminated its messages by engaging with heads of governments, finance ministers, business leaders and other key economic decision-makers in over 50 countries around the world.