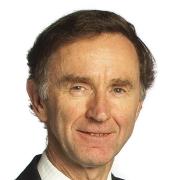 He joined The Hong Kong and Shanghai  Banking Corporation in 1982. In 1998, he was appointed to the Board of HSBC Holdings plc as an Executive Director. He became Gropu Chief Executive in 2003 and Group Chairman in 2006. He reitred from HSBC in December 2010.

He was created a Life Peer in 2010 and was appointed Minister of State for Trade and Investment in January 2011. He reitred from this position in December 2013.

He was educated at Lancing College, Sussex, and at Oxford University where he graduated in 1969 with a BA (First Class Honours) in Politics, Philosophy and Economics. He also obtained a Masters Degree in Political Science from the Massachusetts Institute of Technolgy in 1975. Lord Green is married with two daughters.