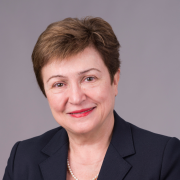 Kristalina Georgieva is Managing Director and Chair of the Executive Board of the IMF. She previously served as Chief Executive Officer for the World Bank (International Bank for Reconstruction and Development and the International Development Association) where she worked to build support across the international community to help mobilize resources for poor and middle-income countries and develop more effective solutions for the poor at the scale required.

Georgieva, a Bulgarian national, helped shape the agenda of the European Union, first as Commissioner for International Cooperation, Humanitarian Aid and Crisis Response, managing one of the world's largest humanitarian aid budgets, and later as Vice President for Budget and Human Resources, in charge of the European Union's €161 billion (US $175bn) budget and 33,000 staff around the world.

Before joining the European Commission, Georgieva held multiple positions at the World Bank, including, most recently, Vice President and Corporate Secretary (2008-2010), and from 2007 to 2008, Director for Sustainable Development in charge of 60 percent of the World Bank’s policy and lending operations.