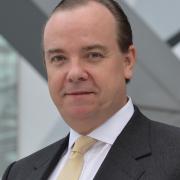 Before his appointment as Group Chief Executive of HSBC Holdings plc in January 2011, he was Chairman of Europe, Middle East and Global Businesses of HSBC Holdings plc. He was appointed Chief Executive of Global Banking and Markets and HSBC Global Asset Management in May 2006. He has also served as Chairman of HSBC France, Deputy Chairman of Trinkaus & Burkhardt AG and on the boards of HSBC Bank plc, HSBC Bank Middle East Limited, HSBC USA Inc. and HSBC Bank USA, N.A.