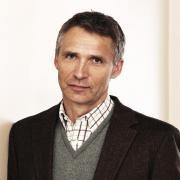 Jens Stoltenberg has been a forceful champion on development issues and a strong supporter of the United Nations. He was member of the board of the Global Vaccine Fund 2001-2005; a member of the Norwegian Defence Commission 1990-1992; and headed the Government’s Commission on Male Roles in 1986.  He was Candidatus Oeconomiae (economist) at the University of Oslo from 1987.